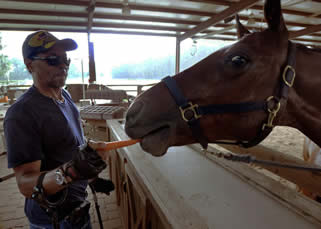 Veteran David Nicholson stopped by Quantum Leap Farm in July to test out his new prosthetics. Injured in a bomb blast in Afghanistan, the brave veteran lost both legs from the knee down. Since then he has been fitted with some of the most advanced bionic devices available. Partially controlled by a computer interface, his prosthetics are still in the testing phase.

David said the acid test for these experimental limbs would be riding a horse. Quantum Leap Farm Founder Edie Dopking, Head Riding Instructor Jenna Miller and Stable Manager Liz Howell were happy to comply. Choosing one of our most responsive therapy horses, Cowboy, David was ready to go. Jenna Miller began the therapeutic session and Liz led Cowboy and David around the arena. David did so well, he was able to take over the reins and ride Cowboy on his own in the pasture.

David Nicholson said his legs and Quantum Leap both passed the test. “The days of being a cripple are over with,” says David. “They said as long as you put in the physical therapy, you are pretty much guaranteed to return to 95 percent.” Cowboy can’t wait for David to return with another carrot.