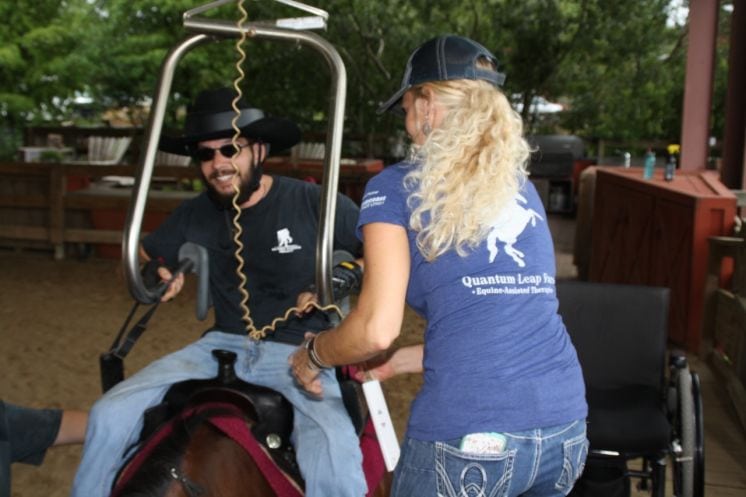 The 30-year-old veteran, injured nine years ago while serving in Italy, soon became a client after his first visit to the nonprofit that offers therapeutic horseback riding as part of the Wounded Warrior Project.

But he never expected to be put to work.

Lalli now serves on the board of directors and takes photographs at events for the 16-year-old organization that includes former military members, children and adults with special needs and pediatric cancer patients among its clients.

He also met his wife, a Quantum Leap volunteer, at the farm.

“They keep motivating me; they keep challenging me and it keeps me going,” Lalli said as he finished a horseback ride, assisted by a volunteer, in a covered arena.

Founded in 2000 by Edie Dopking with the help of friends, the first clients were the volunteers in Dopking’s study about the benefits of horseback riding for mobility, the topic of her doctoral dissertation in aging studies at the University of South Florida.

The nonprofit grew with more programs, especially for the military veterans returning from service with physical or mental illnesses, including post-traumatic stress disorder.

“What happens with PTSD is they feel that no one understands them, that they are isolated, not good at anything,” said Dopking, 56, who earned her doctorate in 2003. “With horses, you have to earn their trust. Horses are non-judgmental and you have their unconditional acceptance. 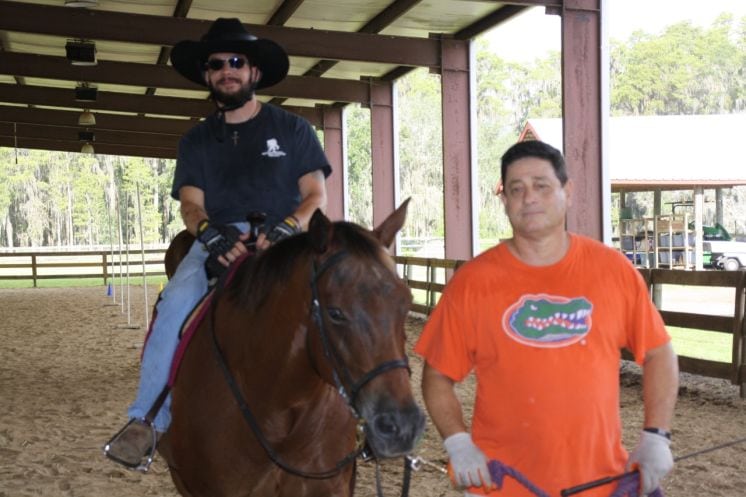 The farm in northwest Hillsborough County now sees 1,500 clients a year, has 16 horses, two donkeys, a staff of 19 full- and part-time employees and 600 volunteers.

Some goats and chickens also live on the 20 acres — the farm owns 10 of the acres and leases 10 from the county. Visitors can spot wildlife, including deer and wading birds, in the pastures and on the adjacent 1,700-acre preserve.

The farm offers programs, individualized and in groups, for all ages and various disabilities. Clients pay part of the costs (starting at $35 for a half-hour of riding) with most expenses covered by donations from individuals and corporations, fundraising efforts and grants.

The farm operates on a $1.1 million budget with most of the horses donated and “some are in their second career,” having previously resided at riding schools, Page said.

The nonprofit is among those organizations that have recognized the growing number of military veterans committing suicide. September serves as National Suicide Prevention Awareness Month, which promotes resources and awareness around the issue.

Warrior Mission: At Ease, a five-day retreat for veterans and family members, stands as one of the farm’s newest programs. It is designed to help those suffering from PTSD, chronic pain, mild traumatic brain injury and military sexual trauma.

The 2-year-old program is offered about six times a year, and the goal is for it to be once a month. The participants, usually about eight to 10 in a group, come from across the country with the farm covering the cost of air travel, hotel and other expenses.

It focuses on education, coping and peer support.

“Some have come at really low spots and some have attempted suicide,” said Jenna Miller, the farm’s program director. “We try to shift their perspective while receiving peer-to-peer support, too.”

As for Lalli, he rides at least once a week and “it takes my mind off things. I think only what I do on the ride.”

From his rides, he “fell” for one of the horses, Sonic, and decided to be her sponsor and provide for her care.

After the rides, he returns to his wheelchair with the help of a power lift.