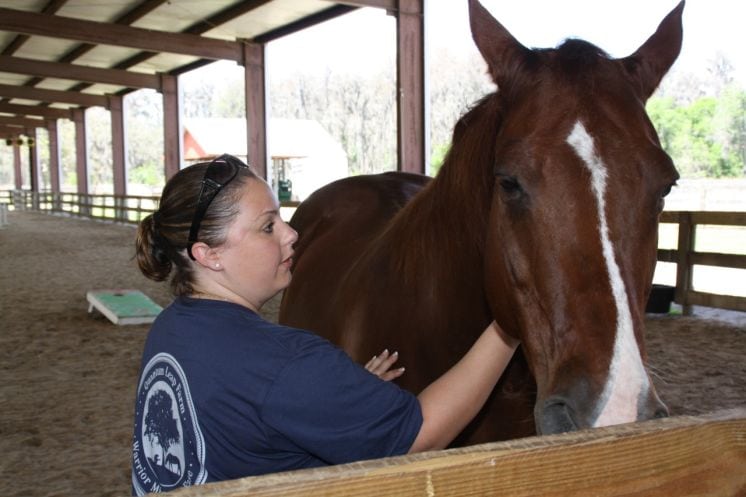 ODESSA- For five days the women participated in story-telling activities, practiced yoga and walked with horses in an equine-assisted mental and behavioral therapy program.

The eight female active-duty military members and veterans were at the retreat to share fears, successes and goals while finding common ground beyond the post-traumatic stress disorder (PTSD) that brought them together.

“I was raped in Afghanistan by a military member,” said one 33-year-old participant, a 14-year Navy veteran who asked to remain anonymous. “It happens more than you ever know.”

Last week’s retreat was one of several offered through Quantum Leap Farm, a nonprofit that uses Equine-Assisted Self-Exploration (At E.A.S.E.) therapy. Other programs are for male military members, spouses of military members, children and adults with disabilities and children with cancer and their families.

In each case, licensed mental health counselors work with the attendees to gain trust, comfort and security through the farm’s horses. They also use Accelerated Resolution Therapy (ART), neurofeedback and craniosacral massage.

Jenna Miller and Carla Staats are the co-directors of the program, which began several years ago in conjunction with other foundations. About 18 months ago, the nonprofit started offering it alone.

“The program is holistic in nature and we use the horses as tools for emotional growth and learning,” Miller said. “It is just the beginning for (participants). We help them find services around the country and follow up.”

Diana Franz, 65, of Seminole, was among the attendees. She heard about the farm and its program from the Veterans Readjustment Center in Clearwater.

She served in the Army from 1981 to 1984 and said she was raped off-base in Germany during that time. It was 20 years before the term “military sexual trauma” came into use. And it was another 10 years before the military adopted regulations to deal with such situations, she said.

“For a long time, I denied my status as veteran,” Franz said.

With the retreat, she is “more at ease,” she said. “My emotions and my situations are validated.”

The various retreats had been offered every other month but the farm is trying to increase the frequency. Most attendees hear about them through word of mouth, said co-director Staats.

“They go back and tell everyone about it,” she said, noting that applicants are screened before they are accepted.

Through fundraising efforts and donations, the farm provides travel, meals and lodging in nearby hotels for the retreats. The value is about $3,000 per attendee.

“We’ve seen how powerful (the retreats) are,” Miller said. “They really give them hope for the future.”